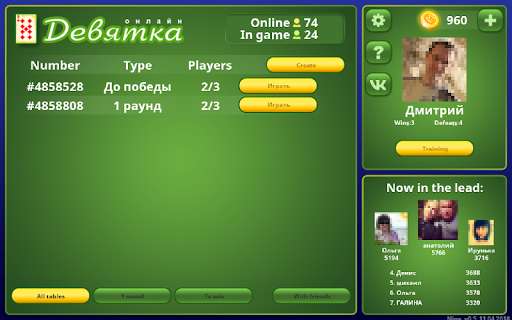 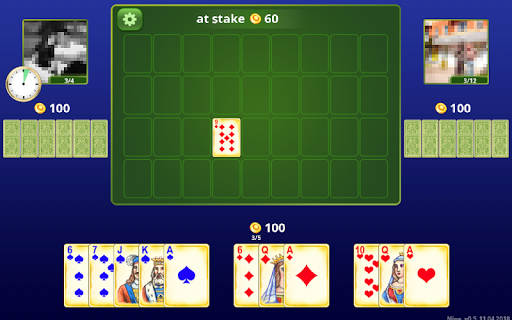 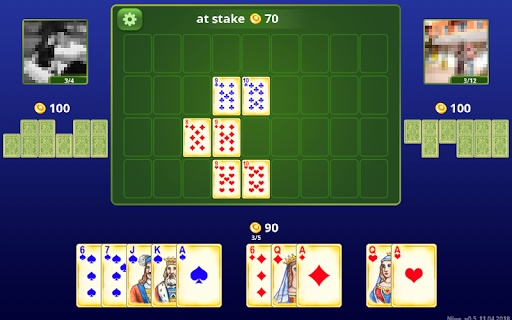 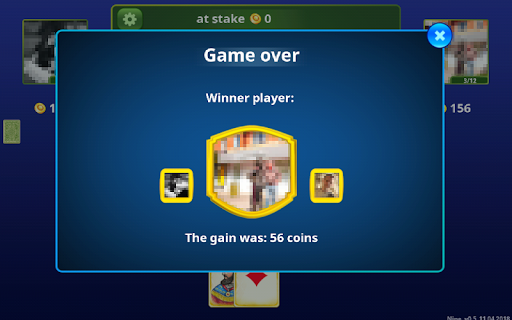 «Nine online» card game with a deck of 36 cards for three players.
The player’s task is to get rid of the cards on his hands first.

♦ Course of play ♦
To enter the game you must have a minimum of 120 coins. The cards are carefully shuffled and distributed completely to all players. After that players bet on the coin 20 coins. They go by turns, clockwise. During his turn, the player is obliged to put the card, if there are no cards for the move, 10 coins are put on the line.

The first to go is the one to whom the diamond nine fell. The next player can put to this nine on the left – the figure eight or on the right – the ten tambourine, or one of the three remaining nines. The third player spreads one of his cards on the table, adding a number of neighboring cards by value. Available nines can be uploaded at any time.

A timer in the form of a clock is located next to the player’s cards, for which a move is expected. If the time allotted for the turn is over and the player has not made a move, the computer will automatically execute the turn for the player, and thereby transfer the move to the next player.

To make a move, just click on the map

The game started can not be stopped, abandoned or interrupted. In other words, if you started the game, then you must complete it. If, for any reason, the connection disconnects, the player should reconnect and continue the game. For the time of the player’s absence, the computer occupies his place, which allows other players to continue and complete the game. If the player does not return to the game that was started earlier, the remainder of the reserved coins will not be returned to him, even if the retired player is the winner – the winnings will not be received.

♦ End of game ♦
The winner of the game gets coins from the stake minus interest from the win.

♦ Important ♦
– 3 people play virtual coins, so all types and modes of the game are entertaining and are not gambling games;
– the game requires a permanent connection to the Internet, as well as registration and connection to the social network «Odnoklassniki» or «VKontakte».

Do you want to play with real people? Join now!
Bug fixes