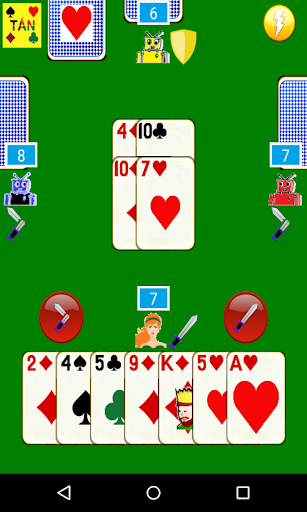 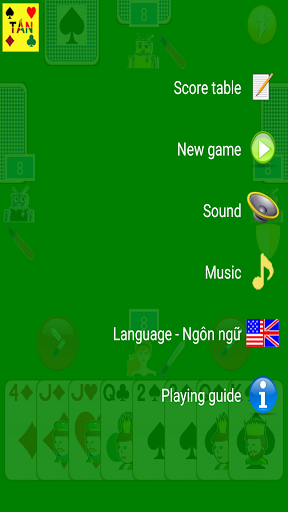 Tấn is one of popular poker games in Vietnam.

The game is for a group of from 2 to 4 players. Players attack and defend in turn until all cards in their hands down to win.

Each game set, there is a suit selected randomly to be the royal suit.
Other suits are normal suits.

Strength of cards in a suit increase from 2 to A.
A royal card is stronger than all normal cards, despite of their rank.
Two normal cards in different suits are not able to compare to each other. So, there is no the stronger one among them.

A set has many rounds.

At begining of a set, each player is distributed 8 cards randomly. Remaining cards will be distributed to players after each round if their card number is smaller than 8.

Rule to defend:
– should use stronger cards to defend
– if cannot defend or just want to surrender (for the tactical purpose of holding big cards for example), defender must take all cards on the table
– if the card number on the defender’s hand is greater or equal 17 (over 8 x 2), he loses
– if the defender spends all his card to defend, he wins.

The 1st rank player has the right to go first (be the main attacker A in the first round) in the next set.

Note: above is my modification version of Tấn in order to fit it on mobile phone. The traditional version doesn’t limit number of holding cards, uses Jokers as strongest defending cards (but Jokers aren’t attacking cards), the 4th rank player should tribute the 1st rank player (King) the stronggest royal card he has at right begin of next set and the King returns him an any card for compensation.
1.3
– fixes Q image
– keeps players scores after restarting game
1.2
– uses new cocos2d-x framework
1.1
– improves AI
– adds 2 new levels